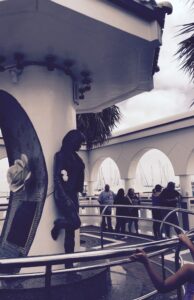 I noticed her the first day of class, even though she was sitting in the back row. We will call her Selena – after the singer, since we both loved the Queen of Tejano and her music.

She was quiet for the whole first class. And most of the second.

I believe in speaking A LOT of Spanish in class, and I walk around the class engaging with students in the language. Every time I would walk by her talking with her partner, her voice would drop and she would get very quiet.

When I called on her to volunteer, she would share her answers, but her voice would drop down so low that I would often have to ask her to repeat herself.

Finally during the second week of class I asked her why she was so hesitant to speak. “You score well on quizzes and tests…¿por qué no te gusta hablar?” I asked hesitantly.

“My whole family speaks Spanish,” she said finally. “But I don’t talk right.”

“My parents never taught me. Where they are from – the border – they got in trouble for speaking Spanish at school. I never learned and now it’s too late.”

Stories like these are common in heritage language speakers.

“I want to speak better Spanish but I am afraid to make a mistake. I just don’t talk right. No hablo bien.”

We talked about how brave it was to learn the language of her family and community. Mistakes were natural. Just like kids, new language learners are starting out with very limited language skills but by surrounding themselves with the language and taking every opportunity to speak, they build their abilities, and most importantly, their confidence.

“It’s never too late to learn,” I said. “It says a lot about you that you are willing to fight for your language and culture.”

Over the course of that semester there were many more opportunities to speak in class, and though Selena still sat in the back, her voice became surprisingly confident. Soon she was asking questions in Spanish and willingly volunteering answers.

She may have started quiet, but by the end, she was so confident. She had claimed her language and culture and made space for herself in it.

Selena was on her way to fluency. But most importantly, she was finding her voice.

This work by hoink is licensed under a Creative Commons Attribution-NonCommercial 4.0 International